skip to main | skip to sidebar

I will admit that somewhere around mile marker 250 of my 500 mile drive to Lexington, Virginia, I thought to myself, is it truly fair to drag my very patient husband, my sleeping 17 month old daughter and my petite two year old gelding, Carnivale King, down to the FEH Championships at the VA Horse Center? What did I really think I would accomplish other than another learning experience for Rex? What were his chances of a good showing anyway, especially after going through the USEA website and reviewing all the competitors' photographs and the scores from other classes held this year. Yikes, it was like bringing a knife to a gun fight! I felt seriously in over my head. Experience, I told myself, this is all for the experience.

The FEH series is still in its infancy, and while I have heard some grumblings about scoring and the "type" of horses that are being placed over others, the overall vision of the program as a showcase for eventing breeders as well as the early experiences it affords our future eventing stars cannot be beat. Another bonus, the fabulous, friendly camaraderie the Eventing community is known for! We really need more events like this in Area 1, and huge kudos to Stony Brook Farm in Peterborough NH for holding one this year and committing to one (plus YEH classes) next year! I felt it was important to make the trip to VA, to support the program, and to give Rex the opportunity I felt he deserved, even if the judges didn't feel the same way about him.

Now, the VA Horse Center is a serious facility, far bigger than anything Rex had seen before, but he handled it with ease; enjoying his jaunts through the barns, the indoors, checking out bleachers and vending machines, and the endless parade of trailers and horses. Everything piqued his interest, and the more he saw, the happier he was to explore. I was relieved, and impressed, everything I have thrown at him he responds with a can do, no fear attitude. As the FEH directive states, "shows inner confidence"; well that's Rex, the poster boy for inner confidence! At least one of us was confident!

I had decided to hire the professional handler, Christine Smith of Wild Expectations Farm, to handle him for the class. While I had handled Rex for the FEH class at Stony Brook, I was under no illusion that I had the experience to handle him at Championships. We had worked too long and hard to let it all ride on a rookie handler (me). So, all cleaned, braided and bridled, I handed Rex off to Christine in the warm up ring to work a little of her magic before presenting him to the judges in the big arena. I took one last look at my guy practicing his open stance with Christine and, with camera in hand, hustled my way to the bleachers.

I cannot tell you how awesome it was to hear his name over the PA system and watch him saunter into the arena, plant himself before the judges, prick his ears forward and strike a pose. This little horse, whose dam I evented around Area 1 while she was carrying him, who was born in my husband's arms, who I have lovingly ached over for 2 years, was standing here in Virginia, giving the judges every opportunity to love him like I did. The camera never came out of my pocket, I was too nervous and too overwhelmed, I wanted to see it all happen live, not through the lens of the camera. I wanted it burned in my memory. I watched him walk and trot the triangle without an issue and stand again for the final look over. In the blink of an eye we were back in the warm up arena, watching the other horses take their turns. The quality of these horses was top notch, they, without a doubt, had earned the right to be there. The competition was not only stiff, the horses were huge, making Rex a virtual David among Goliaths. I was crestfallen; Rex had been so good, but he was no match for these horses.

The five colts and geldings were called back into the arena for the results, and again I found myself on the bleachers. I thought, if we could at least place fourth, it would be a crowning achievement for my little horse. The pinning began and to my relief, Rex was not the fifth horse in the group, and then he was not the fourth either. When the horse I was sure was going to win placed third, I thought I was going to fall down. Rex was in the top two! I found myself no longer sitting but straining over the rail, listening for the results. It took a moment to register when the second place number was not ours either, and only when I heard the thunderous pat on Rex's neck from Christine did it hit me, he had won the class. I willed myself not to cry, but when I saw my husband and my daughter, I just broke down. My little paint horse had done us proud, Carnivale King was Champion Two Year Old Colt/Gelding.

Rex was not Grand or Reserve Grand Champion Two Year Old, I guess this gives us something to work towards in his three year old year. Still, I could not be happier with him. He handled a thousand mile round trip trailer ride, three days and nights in a new facility with no turn out, early morning braiding, and showing in front of the largest crowd he has seen to date. All of this with hardly a whinny. There is no doubt that the FEH experience has been a beneficial one so far, and can only continue to be the foundation from which to build upon.

Eventers with young horses need to take advantage of the Future Event Horse and Young Event Horse Programs; stallion owners need to use it to promote their stallion's offspring, breeders to help sell their youngstock, and owners to help give their babies a leg up on the competition in years to come, and to build that personal relationship with their horses that eventers are known for. I look forward to the 2010 season, and getting Rex out again. We'll also be taking our yearling Windfall filly with us too. Hope to see you ringside!
Posted by StoneleighFarm at 12:46 PM No comments: 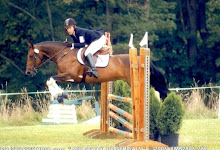